Chris Beetles Gallery occupies a distinct position in the world of commercial art galleries by specialising in traditional artworks from the 18th, 19th and 20th centuries, and by remaining particularly focussed on British watercolours, oils, illustrations, cartoons and figurative sculptures.

In 1975 the gallery was founded by none other than Chris Beetles himself. Ever since 1984, the gallery has been based in St James’s, London’s infamous art dealing district.

Chris Beetles had an existing website which had been successfully showcasing the gallery’s collection of around 35,000 works since 2011. The website stock was driven by a FileMaker database (originally created in the mid-90’s!) which also served as their business management system.

Although the website had done very well over the 8 years it was live, it was built on ageing technology which was not flexible enough to cope with newer designs and requirements. There was also limited control over SEO.

The goal was to create a new website with a stronger emphasis on images to showcase the gallery’s artwork collection. After an initial consultation period, it was decided that a full rebuild using the Laravel framework would meet the current and future requirements of the business. In order to integrate with the new web platform, the FileMaker database would also need to be rebuilt.

The solution that we have come up with is a bespoke website along with e-commerce functionalities for selling books and other publications. Customers are able to search and view details about the artwork they are interested in.

We used carousels, higher quality & larger sized images to highlight current exhibitions and sculptures whilst still prioritising web and mobile optimisation. We have also used several social media integration tools such as Jucier.io and GrahamSnaps which allows Chris Beetles to further showcase their own artwork as well as any announcements of new exhibitions and any events they may have.

The project also included a bridge between the website and the rebuilt FileMaker app. The new features in the latest version of the FileMaker platform facilitated a seamless integration with the Laravel website.

Native functionality within FileMaker is able to authenticate and communicate with web APIs to allow data to be pushed and pulled from the website. This allowed even more dynamic website content to be controlled from within the database, including stock, artists, books, exhibitions, images and specific homepage features.

The layout functions within FileMaker also allowed a clean, modern and intuitive user interface to be created, reducing human error and speeding up general usage. The app back-end is designed well allowing further functionality to be added in the future and for the system to be maintained easily by our developers.

As a result, Chris Beetles have been provided with a modern website and a better experience for their customers, they can also advertise and get their customers more involved with updates and news on social media as well as email newsletters about exhibitions and new artwork available.

The time spent managing their stock and exhibitions internally has been reduced as well as time spent uploading content to the website. There are also fewer errors when uploading content and better reporting on errors that do occur. The database is now ready for any future business requirements. 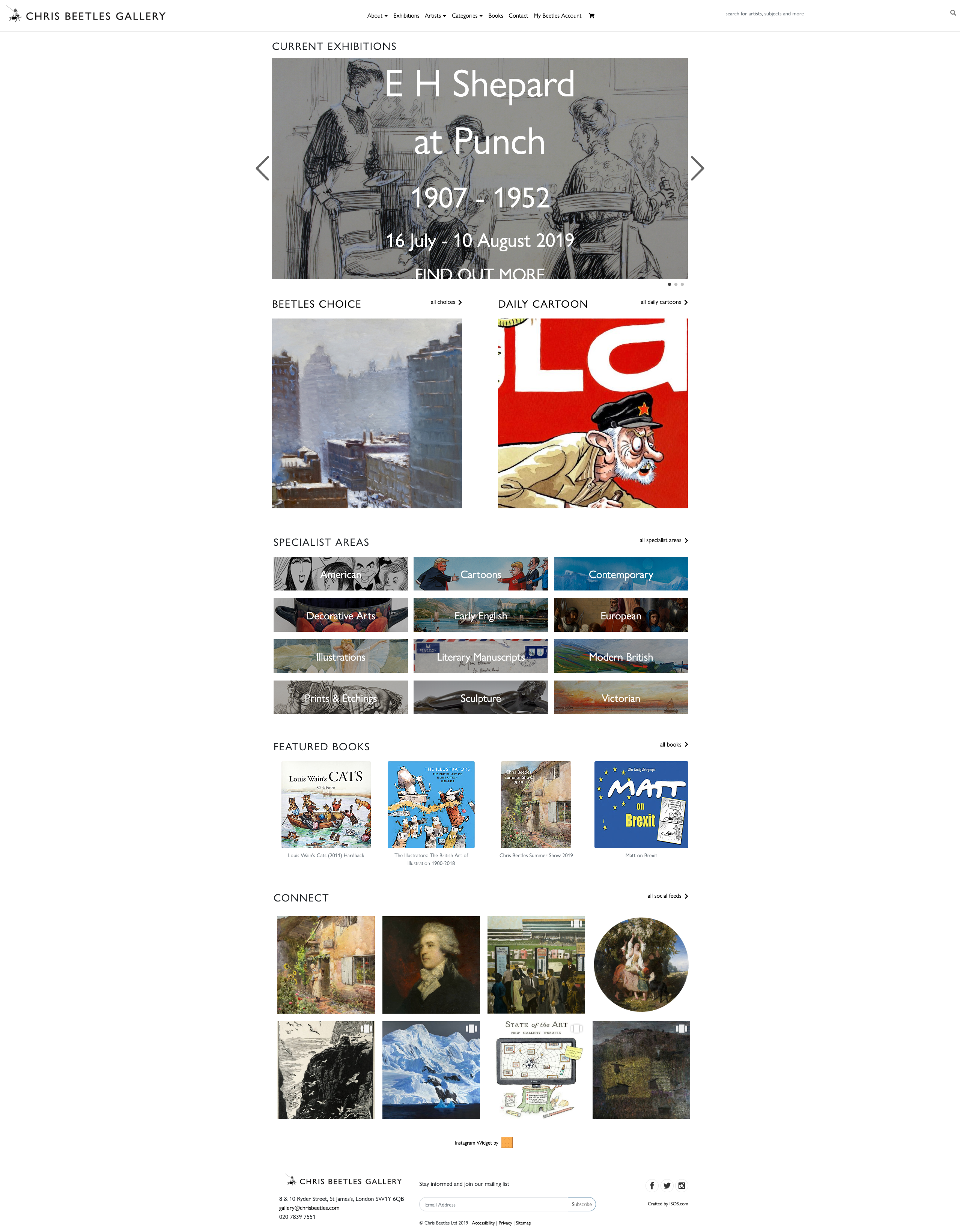 Visit site
Back to our work